Ollis Captures 2022 PGA of BC Championship At Pitt Meadows GC 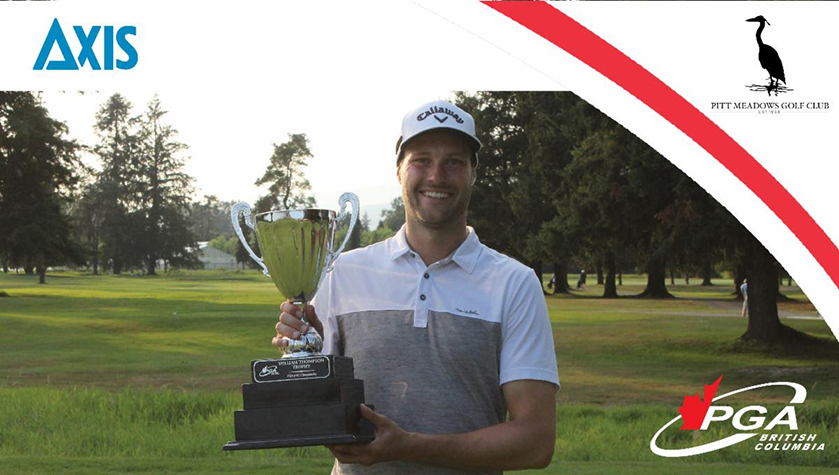 The Victoria, BC-native fired back-to-back rounds of 2-under par 70, including a final round on Tuesday that came bogey-free to claim his first PGA of BC victory. After the completion of 36-holes, Ollis and Seymour Creek Golf Centre’s Bryn Parry (69-71) found themselves tied at 4-under par and heading to a sudden-death playoff.

Both players tied with pars on the first playoff hole – the Par 5 1st at Pitt Meadows Golf Club, then proceeded to the Par 5 18th hole where Ollis’ tee shot found the right rough.

Parry’s drive landed in the left centre of the dogleg-left fairway and proceeded to hit the green in two, leaving himself 25-feet and a makeable putt for eagle. Ollis managed to muscle an iron to just short of an undulating and tricky green and got up-and-down for birdie. After Parry narrowly missed his eagle putt, he tapped in for birdie and the two close friends headed back to the 1st for a third extra hole.

Both players found themselves green-side in two but Parry had to hit a miraculous flop-shot over a tree, leaving him 15-feet for birdie. Ollis’ chipped-up and left himself four feet. Parry’s bid for birdie barely missed before Ollis calmly sunk his putt for the win.

Although it's his first provincial championship win, Ollis has been knocking on the door for the past couple of years and has been extremely close on a few occassions. At the 2021 PGA of BC Championship held at Rivershore Golf Links, he narrowly missed a putt on the 36th hole to force a playoff, which ultimately gave Jake Scarrow (Gorge Vale Golf Club) the title.

“It feels like it’s been forever, even though it hasn’t been” said the 29-year-old. “I keep giving myself chances and knew eventually something great was going to happen. And sure enough, today happened to be my day. It means a lot to finally win a PGA of BC title”.

2022 has been a banner year for Ollis, especially as of late on the Vancouver Island Club Professional Tour. After a fourth-place finish in the season-opening event at Highland Pacific Golf, he has since rattled-off four straight victories dating back to April. He hopes the streak continues heading into the Tour championship in the coming weeks.

For his win, Ollis etches his name on the William Thompson trophy and takes home the $6,300 winner’s cheque. He also earns 50 valuable points towards the 2022 PGA of BC Order of Merit. Heading into the championship, Ollis found himself fifth in the standings, trailing 2022 PGA of BC Assistants’ Champion Zach Olson (Chilliwack Golf Club) by 24 points.

This win should see a tight race between the two as each of the four regions head into their Tour Championships later next month to help determine the 2022 PGA of BC Stan Leonard Player of the Year.

Olson led the championship at the halfway point but struggled to find any rhythm on Tuesday. He closed with a final round 76 to finish even-par and in a tie for 8th place.

Parry earns $4,200 for runner-up. A win for him would have set a new modern-era record with his fifth PGA of BC Championship, a title he currently shares with Scott Minni (Life Professional). His last victory came in 2019 when this event was held at Whistler Golf Club. His other three championships came in 2000, 2008, and 2015.

Parry is no stranger to Pitt Meadows Golf Club as the 50-year-old’s golfing roots began at the club when he joined as a junior golfer, over 35-years ago.

Cheam Mountain Golf Course’s Nigel Sinnott was in the hunt for the majority of the final round, but an errant tee shot on the 17th hole led to a double-bogey, ultimately sinking his chances for a win. He finished the tournament one-stroke shy of the playoff, alone in third place and cashed $3,250.

The $35,000 championship purse was split amongst the top 50 players in a field that consisted of 99 golf professionals from all over BC.

For their top four finish amongst the Club Professionals in the field, Johnson and Kitts, alongside Rob Tadey (Fairview Mountain Golf Club) and Nathan Grieve (Talking Rock Golf Course) qualify to represent Team BC in the Inter-Zone matches at the PGA Head Professional Championship of Canada. The event takes place December 5-8 at Verrado Golf Club’s Victory Course in Buckeye, Arizona.

Club Professionals are defined by members who are actively in the Head, Head Teaching or Executive Professional categories at the time of the championship.

CLICK HERE to view complete results and payouts from the 2022 PGA of BC Championship presented by Axis Insurance at Pitt Meadows Golf Club.

Pitt Meadows Golf Club was hosting its first PGA of BC Championship event in 30-years and once again served up an exciting finish. The PGA of BC thanks Head Professional Wes Doka, Superintendent Ryan Brooks, General Manager Nick Droulis, and the entire team of staff and 30+ volunteers from the club’s membership for their outstanding hospitality in hosting the event.

The Association also thanks longtime presenting sponsor Axis Insurance for their continued patronage of the championship.