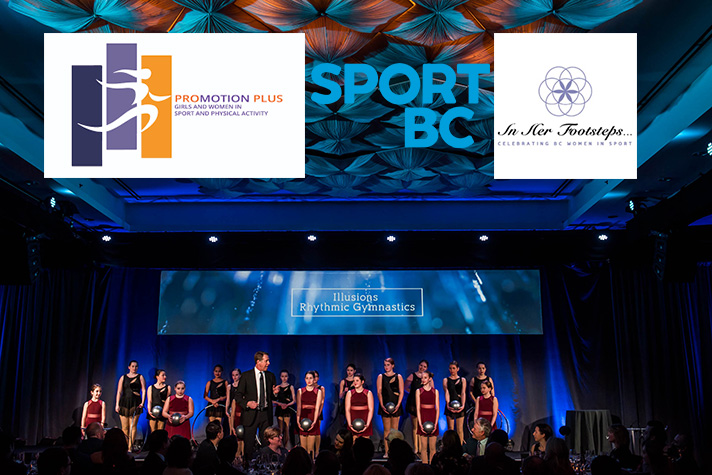 October 24, 2022 – (Vancouver, BC) ProMOTION Plus is excited to recognize three deserving women that will be celebrated at the 55th Sport BC Athlete of the Year Awards on Thursday, March 9, 2023 at the Vancouver Convention Centre East.

Two women will be honoured with the prestigious In Her Footsteps, including British Columbia Golf Managing Director of Player Development, Debbie Pyne . . . Celebrating BC Women in Sport recognition program and one recipient will receive the Bobbie Steen Legacy Foundation Award...

In Her Footsteps Honourees

The purpose of In Her Footsteps…Celebrating BC Women in Sport, is to name and honour women who have made a significant contribution to sport in BC. The athletes, coaches, officials, builders, pioneers, teams, officials, and members of the media who have been selected for this honour have helped shape sport in BC. Their collective impact is felt across the BC sport sector and throughout the province. The honourees are celebrated at Sport BC’s Annual Athlete of the Year Awards and are featured at the In Her Footsteps . . . Celebrating BC Women In Sport Exhibit at the BC Sports Hall of Fame. The exhibit tells the stories of the Honourees through interactive touch-screen component, artifacts, text, and photographs.

SUE GRIFFIN, Vancouver
Sue was active in several sports and found her love of tennis after attending Wimbledon as a young girl. Her lifelong passion for the sport involves watching, playing, and competing. When there was no one around to pick up a game of tennis, she took up squash and became involved on the board with Squash BC, chairing the Women in Squash committee, developing a grassroots program called Emerging Women and Girls in Squash to encourage increased participation amongst women in BC. Inspired by corporate and community leaders who embrace the values of sport as a foundation for organizational success, she has been a committed leader in the amateur sport sector for over two and a half decades. She was the first female CEO of the BC Sports Hall of Fame taking the stories of inducted members throughout BC, and then the first female CEO for Tennis BC. For the last 25 years she has actively engaged with government and sector agencies, continuing to advocate and step up as a spokesperson to ensure that there are ever-emerging opportunities for those who identify as girls and women to participate in sport and recreation, on the field and in the Boardroom. As past chair, director, mentor, and guide for ProMOTION Plus, she advocated relentlessly with the Board to find a new home for the society when key funding was not renewed. This resulted in a strategic relationship with Sport BC, ensuring that there continues to be a voice for girls and women in sport and physical activity in BC.

DEBBIE PYNE, Tsawwassen
Debbie has devoted a lifetime of work to create opportunities for young girls and women in sport in British Columbia. Her involvement with ProMotion Plus and CAAWS began almost thirty years ago, to pilot the “On the Move” program. A national program to inspire young girls to participate in sport and physical activity. She was awarded the 2010 Canadian Women in Sport Most Influential Women in Sport in Canada and was a strong advocate for the inclusion of women ski jumpers in the 2010 Winter and Paralympics Games in Vancouver. Hosting a reception for the USA and Canada Women Ski Jumpers as they battled for inclusion in the Olympics. Debbie has been an active sport volunteer involved with Sport BC, Canadian Women In Sport and she was a Board member of ProMotion Plus for ten (10) years then an additional five (5) as an honourary member; all of these positions involved work on key gender equity initiatives. In her role as Executive Director for BC Ladies Golf Association from 2002-2004, she led in the merger a membership of 20,000 girls and women to establish a new provincial sport organization, British Columbia Golf. Her focus during the amalgamation was on gender equity solutions and equal representation of women on the new Board of Directors. Debbie has a deep passion for advocacy and sport, has influenced many young people and worked to shine a light on girls and woman in sport.

Amy has been working in sport since the age of 12. She got her start teaching skating lessons at her home arena in Mill Bay, BC. She quickly transitioned to working at hockey camps at Kerry Park Recreation Centre and with the Centre Ice Female Hockey School. Amy put her focus on leading by example for other females playing hockey in her hometown. She played for UBC Women’s Ice Hockey team from 2003 – 2008. During this time, Amy continued to work hockey schools in the summer, giving back to the game that had given her so much. Amy’s playing career ended in 2009, after one season playing for the BC Breakers in the WWHL. She transitioned into coaching full time, working for the UBC Hockey School, running skill development sessions for youth and adult hockey players. She worked for the UBC Hockey School from 2007 through to 2018, including several young female hockey players and a large group of women starting hockey later in their lives. In 2019, Amy launched a Women in Sport Speaker Series, and this program remains her key passion now.

“The Athlete of the Year Awards is a celebration of sport in our province, and we are looking forward to showcasing a wide variety of stories during the event. Our In Her Footsteps Honourees and Bobbie Steen Legacy Foundation Award Recipient, are exceptional choices to be recognized by ProMOTION Plus,” shares Sport BC’s President and CEO, Rob Newman.

“We look forward to learning more about their important gender equity work and celebrating their collective accomplishments at the 55th Annual Athlete of the Year Awards on March 9, 2023.”